I Am A Jelly Donut

I Am A Jelly Donut

One of the most famous speeches in the 20th century demonstrates the importance of the way that something is said as opposed to the words of what is said.  In mediation, negotiations, and all types of communication this statement is true.  It is not what you say, but how you say it.  President John F. Kennedy is a perfect example of this statement in his famous speech in Berlin.

First, let me play the original speech for you.

The import of the speech is clear.  Kennedy, in a time of turmoil and trouble lets the people of Berlin know that he is with them.  He made that speech to the people of Berlin while facing the Berlin Wall.  He has let them know that he is a citizen of Berlin and will stand with them.   To most people, this is a historical moment and a momentous time in history.  What is interesting to know is that his words did not convey that message.  Here is a humorous look at what his words actually conveyed (as opposed to the intent — and accepted premise — of the message).  [WARNING:  THERE IS SOME PROFANITY IN THE FOLLOWING CLIP]

Just to be make sure that the comedic license hasn’t gone too far, I uncovered an article in the New York Times from 1988 recounting this very gramatical mistep.  It states:

It’s worth recalling, again, President John F. Kennedy’s use of a German phrase while standing before the Berlin Wall. It would be great, his wordsmiths thought, for him to declare himself a symbolic citizen of Berlin. Hence, ”Ich bin ein Berliner.”

What they did not know, but could easily have found out, was that such citizens never refer to themselves as ”Berliners.” They reserve that term for a favorite confection often munched at breakfast. So, while they understood and appreciated the sentiments behind the President’s impassioned declaration, the residents tittered among themselves when he exclaimed, literally, ”I am a jelly-filled doughnut.” (NYT)

Indeed, I even found a picture of the the pastry itself. 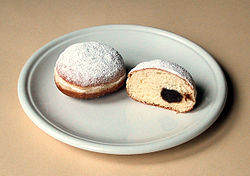 so the question arises, why does such a funny statement have such great significance.

The answer, plain and simple, is that words are a limited form of communication.  To truly communicate with a person, you need to understand the entire message:  The context.  That context is from non-verbal signals as well as the societal and social context of the statement.

In mediation and negotiation, you will often flub on a statement.  What you cannot flub on is intention.  You must be completely present and in the moment and communicate the message with genuineness.  If you do so, then even if you make a verbal mistake, you can make sure that such verbal mistake does not become a communication mistake.