Expression of Anger is a Bargaining Tool

Expression of Anger is a Bargaining Tool 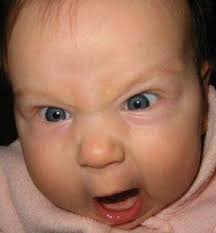 The visual expression of anger is universal across all societies.  The thinned lips, the lowered brow, and flared nostrils — That is the Anger face.  However, the question was recently posed — Why that face versus another?  The answer lies in our demonstration of dissatisfaction in a conflict or bargaining scenario.

“Our earlier research showed that anger evolved to motivate effective bargaining behavior during conflicts of interest,” said Aaron Sell a lecturer at the School of Criminology at Griffith University.   The bargaining power was based on physical ability to create harm to the other.  “The greater the harm an individual can inflict, the more bargaining power he or she wields,” said Leda Cosmides, Professor of pyschology at UCSB.

“This general bargaining-through-menace principle applies to humans as well,” said John Tooby, UCSB professor of Anthropology. “In earlier work we were able to confirm the predictions that stronger men anger more easily, fight more often, feel entitled to more unequal treatment, resolve conflicts more in their own favor and are even more in favor of military solutions than are physically weak men.”

Starting from the hypothesis that anger is a bargaining emotion, the researchers reasoned that the first step is communicating to the other party that the anger-triggering event is not acceptable, and the conflict will not end until an implicit agreement is reached. This, they say, is why the emotion of anger has a facial expression associated with it. “But the anger face not only signals the onset of a conflict,” said Sell. “Any distinctive facial display could do that. We hypothesized that the anger face evolved its specific form because it delivers something more for the expresser: Each element is designed to help intimidate others by making the angry individual appear more capable of delivering harm if not appeased.”

Anger then is suggestive of one’s ability to fight.

The function of the anger face is intimidation,” added Cosmides, “just like a frog will puff itself up or a baboon will display its canines.”

As Tooby explained, “This makes sense of why evolution selected this particular facial display to co-occur with the onset of anger. Anger is triggered by the refusal to accept the situation, and the face immediately organizes itself to advertise to the other party the costs of not making the situation more acceptable. What is most pleasing about these results is that no feature of the anger face appears to be arbitrary; they all deliver the same message.”

In other words, anger is simply a bargaining tool intended to get the other side to make concessions.  Understanding this concept can be helpful in negotiations to understand the possible issues:

Moroever, in today’s society people sometimes hold their anger in an attempt to mask the anger.  Understanding the subtle cues associated with anger will also let you understand that they secretly are affected by a particular issue.