It’s Not Just Fair, It’s Favorable To You — Being Fair Can Assist You In Negotiations

It’s Not Just Fair, It’s Favorable To You — Being Fair Can Assist You In Negotiations

On many playgrounds, you will often hear the phrase “that’s not fair.”  Those three words also have a huge impact in dispute resolution.  That is because the principle of fairness is often overlooked.

First, and foremost it is important to understand that the concept of fairness is hardwired into our brains.  Several recent neuropsychological studies have discovered that the belief that things should be fairly apportioned or divided is an emotion that is built into the brain and not just a cultural norm.  One study conducted by researchers at Stanford and the University of Illinois found that there are different parts of the brain that respond to concepts of fairness and equity.  As one of the researchers, Brian Knutson from Stanford explained, “When people see an unfair offer, they actually have a negative emotional reaction to it…They have a visceral reaction to unfairness.” 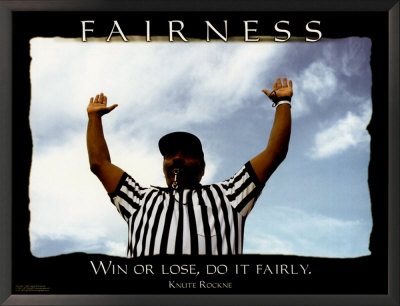 Another study from UCLA also found similar results.  Participants were asked to divide a certain sum of money in any way that they wanted between themselves and another person.  The second person could only accept the sum or reject the sum.  There was no negotiation.  The study found that regardless of the dollar amounts at issue, the participants were much happier with fair offers and much more disdainful of deals that were lopsided or unfair.  Just as with the Stanford study, they did brain scans of the participants and found that different areas of the brain were activated when dealing with fair and unfair offers.

Studies in the sociological and employment context have also found interesting results that correlate fairness to the outcome of the action.    For examples, numerous researchers have found that employees respond both to what happens as well as how it happened.  In other words, “it’s not only what you do, it’s how you do it that counts.”  The researchers found that the level of negative emotions and anger was lower when the employees perceived that they were treated fairly.  Interestingly, anger towards unjust treatment was not reduced by monetary compensation.

This principle is true in many cases in conflict.  Often the perceived unfairness of treatment by one of the parties long ago feeds the emotional anger of people during the dispute resolution process.  This is especially true, as the researchers suggest, when the people were in times of vulnerability and uncertainty, such as impending unemployment, problems with health due to injury, or the loss of a loved one.

Research has also found that there is a direct relationship between trust and fairness of the process.  The more that people consider the process to be fair, the more likely they will be to trust the other party.  In turn, the more the person trusts the other person, the less they are concerned with the immediate economic consequence of the deal.

First and foremost, do not act disrespectfully to the other person.  For example, several studies have shown that people who are treated unfairly or in a manner they deem as disrespectful are more likely to sue the people they perceive created the injustice. The desire for retribution (as opposed to monetary gain) is a common motivation for lawsuits.   Here, before the matter gets into litigation, it is important to try and utilize procedures that create as much fairness as possible.  For example, in the employment context, simple things such as regular reviews of performance, providing the opportunity to be heard by an independent person, providing a means to air a grievance, and using objective standards, can go a long way to creating an environment that is deemed fair.

Second, it is important to understand that, “it’s not what you say, it’s how you say it.” Many cases can be avoided by being aware of the impact of the action on the other person.  Make sure to have good bedside manner.  Treat the person with respect, even when you are taking action that is detrimental to the person.  Provide the person with an opportunity to be heard and to explain his or her situation, even if your mind is made up.

Let the other person be heard, even if that voicing of opinion won’t change the outcome.

Try to create opportunities to remedy the perceived injustice or disrespect that may have happened to the party.  Ask for the other person’s guidance and help as a means of allowing that person to let go of the issue.

As Frank Barron, the UC Berkeley professor,  stated, “never take a person’s dignity: it is worth everything to them, and nothing to you.”  Helping restore fairness costs you nothing, but can make a difference in helping resolve the dispute.