Regret Nothing, But if You Must, Then Compare To Other’s Regrets

Regret Nothing, But if You Must, Then Compare To Other’s Regrets

I saw an interesting quote the other day that made me think about how people deal with the past and the future.  The quote by Fulton Oursler, a playwright and editor,  is ““Many of us crucify ourselves between two thieves – regret for the past and fear of the future.”   I thought to myself do I have regret for things that happened in the past, and I am happy to say that I don’t feel that I want to wind back the clock and do something over again — except perhaps as to my prior attitude towards the need for exercise.  As to the future, I am always worried about the future — as we all are– and try to not crucify myself over things I can’t control.  But sometimes in that light, I fail. 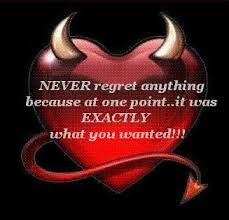 But this quote also made me think that in mediation it is often the case that people are crucifying themselves between the regret for the past and the fear of the future.  How can we deal with such issues to help people avoid the crucification.  As to regrets, there is a new study that helps a little in dealing with such regrets and it essentially finds that “misery likes company.” The study, conducted by Isabelle Bauer, called Making Up for Lost Opportunities: The Protective Role of Downward Social Comparisons for Coping With Regrets Across Adulthood found that when people consider their regrets and life’s decisions, they feel better about it when they compare those regrets with what they perceive other people to experience will regret.  In addition, comparing regrets with other’s regrets is also good for the health.  Here is the abstract:

Two longitudinal studies showed that if adults confront low opportunities to overcome regrets, downward social comparisons can exert self-protective functions across the adult life span, irrespective of age (Study 1 N = 104 young and older adults, Study 2 N= 51 older adults). Both studies found that downward relative to upward social comparisons were associated with improvements in participants’ positive (but not negative) affect, if they perceived low as opposed to high opportunities to overcome regrets. Moreover, Study 2 showed that this beneficial effect on change in positive affect mediated the experience of fewer cold symptoms over time. Supplemental analyses further indicated that the mechanism linking social comparison processes and opportunities with positive (but not negative) affect was associated with the capacity for goal reengagement. In addition, these analyses showed that the obtained effects were largely unrelated to the severity of regret-related consequences and thus ruled out an alternative explanation of the findings.

So taking this study to its conclusion, we should try to compare the client’s lives with how others who have fared worse might feel.  For example, in an employment case of wrongful termination, perhaps we would discuss how would a person feel if they were wrongfully terminated and had no possible remedy; or how most people feel a sense of loss when they lose a job — regardless of the reason.  For an employer who believes he may have been wrongfully sued, you might compare his history of lawsuits with other companies to demonstrate his track record.  The concept in science is called downward social comparison — looking at other people’s lives to make yourself feel better.

This concept of downward social comparison works in many contexts.  Take for example, your own life.  If you feel disappointed or unhappy about your own life, compare your life to that of a homeless person.  Is your life so bad in that context?  What about the regret that you don’t drive a fancy car?  How do you feel about that regret when you compare it to people in other countries are fighting for their freedom and their food?

The other thing that we have in mediation is the fear of the future.  Part of this fear is because of the fear of the unknown.  One of the fundamental rules in physics applies here:  It takes less energy to keep a an object in motion than it does to start an object in motion.  In mediation, it takes less emotional energy (for right now) to continue the path of litigation than it does to start a completely new path.  We need to address both those concepts to address the fear of the future.  By making the future known — as opposed to unknown– we can start the path to eliminating the fear.  Studies show that people are bad judges of their emotions in the future. They fear a consequence, but when that consequence comes they say, “that wasn’t so bad.”  Helping the clients to understand the concept of certainty can help them move away from their fear of the future.

Second, the clients have to see that if they continue in this path of litigation, although they may expend less emotional energy now, they will expend a ton of emotional energy in the near future.  After grasping that concept, they will be more amenable to change because they realize that in the long run, it will take less energy.

To celebrate the fact that we won’t be captive between our regrets and fear of the future, I thought you might enjoy one of my favorite songs by French artist, Edith Piaf, entitled Non, Je Ne Regrette Rien (No, I don’t regret anything).